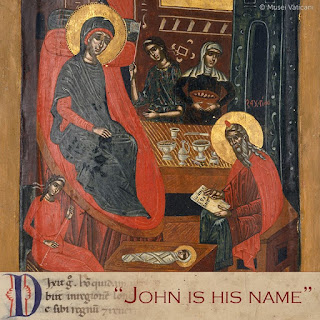 When the time arrived for Elizabeth to have her child she gave birth to a son. Her neighbours and relatives heard that the Lord had shown his great mercy toward her, and they rejoiced with her. When they came on the eighth day to circumcise the child, they were going to call him Zechariah after his father, but his mother said in reply, "No. He will be called John." But they answered her, "There is no one among your relatives who has this name." So they made signs, asking his father what he wished him to be called. He asked for a tablet and wrote, "John is his name," and all were amazed. Immediately his mouth was opened, his tongue freed, and he spoke blessing God. Then fear came upon all their neighbours, and all these matters were discussed throughout the hill country of Judea. All who heard these things took them to heart, saying, "What, then, will this child be?" For surely the hand of the Lord was with him. The child grew and became strong in spirit, and he was in the desert until the day of his manifestation to Israel.
Apart, yet together.   #ChurchAtHome

Usual Sunday Mass times at St Augustine's are at 6pm for the Saturday Vigil and 9:30am for the Sunday morning Mass, which has a children liturgy during Mass.
See all Mass times in our Newsletters, posted to the "Newsletter" section/tab.
* Public worship has resumed and the Church is now open to the public again during the day on Monday to Friday *
Please keep in touch on this website or on our Facebook page to see regular updates on the situation. Masses will not resume at St John Fisher for the foreseeable future.
EMERGENCY HOSPITAL ADMISSION
If you or a family member are in hospital and require an urgent visit from a Priest, please ask the Ward Manager to contact the Priest on call using the hospital 'pager' system. There is a rota in place to cover all the Bristol hospitals 24 hours a day. They will not automatically do this for you... only on request.