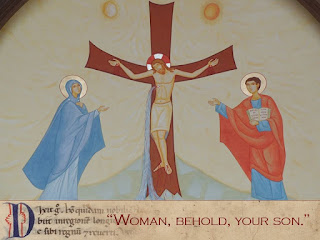 Standing by the cross of Jesus were his mother and his mother’s sister, Mary the wife of Clopas, and Mary of Magdala. When Jesus saw his mother and the disciple there whom he loved, he said to his mother, “Woman, behold, your son.”
Then he said to the disciple, “Behold, your mother.”
And from that hour the disciple took her into his home.
After this, aware that everything was now finished,
in order that the Scripture might be fulfilled,
Jesus said, “I thirst.”
There was a vessel filled with common wine.
So they put a sponge soaked in wine on a sprig of hyssop
and put it up to his mouth.
When Jesus had taken the wine, he said,
“It is finished.”
And bowing his head, he handed over the spirit.
Now since it was preparation day,
in order that the bodies might not remain on the cross on the sabbath,
for the sabbath day of that week was a solemn one,
the Jews asked Pilate that their legs be broken
and they be taken down.
So the soldiers came and broke the legs of the first
and then of the other one who was crucified with Jesus.
But when they came to Jesus and saw that he was already dead,
they did not break his legs,
but one soldier thrust his lance into his side,
and immediately Blood and water flowed out.
Apart, yet together.  #ChurchAtHome