St Augustine of Canterbury: The parish was started from St. Joseph's in Fishponds and in the early 1960's Fr (later Mgr) Tom Hughes paid £16,000 for the land, which now houses the Church, Presbytery, Hall, School and playing fields. Fr Bart Collins was given the task of building the Church and the foundation stone was eventually laid on 25th July 1964. Fr Frank Daly was appointed as its first Parish Priest and he did tremendous work here from 1967-1993 and laid the foundations of the current community and its spirit of willingness to work for the good of the parish. He was followed by Mgr Pat McCoy who worked hard in the parish from 1993 to 1996. Fr Bernard Massey followed him in 1996. He had previously been a chaplain in the army. He served ten years,and moved to Gloucester in the summer of 2006. He was succeeded by Fr Alexander Redman, who served for two years before taking up a permanent Chaplaincy post within the Prison Service.

St John Fisher: After the death of Canon King, St John Fisher in Frenchay, was the first parish to come into communion with St. Augustine's. The presbytery was sold and some of the funds were used to refurbish the lovely little church.
Due to the small size of St. John Fisher, it is no longer pratical to have a Sunday Mass with two preists covering all the parishes in our communion however weekday masses and devotion still happen at St John Fisher.


The Parish is now in the capable hands of Canon Frank Bermingham who joined in February 2009 from Holy Cross in Bedminster. Fr Frank is assisted by Deacon Michael Belt & Deacon John Scanlon.

﻿﻿The parish also looks after th prison in Pucklechurch (formerly Ashfield Young Offenders prison). The parish has a Primary School and Charity Preschool. With groups ranging from Bumps, Babies and Toddlers to the Not-so-Young parish life covers all ages. This, combined with the range of spiritual groups from Charismatic Prayer to the Legion of Mary as well as social action groups like the Soup Run meaning that we deal with a vast array of different needs and wants in a parish community. Added to all this is the evangelisation work done by a number of different bodies. We strive to reach out to everyone in this locality. In doing so we desire to bring to them the love of God as mediated through the Church His Son founded.

At the centre of all we do and are is the celebration of the Sacraments of the Church and in particular the sacrifice of the Mass. There is also a well-organised Children's Liturgy of the Word. There are four musical groups and several organists so the music is varied. We are not solely a child centred parish and have a number of social events and trips designed to meet the needs of adults of all ages. We also arrange regular pilgrimages.
﻿﻿﻿

Our Deanery
﻿﻿The Diocese is split into a number of small groupings of parishes and these are called a deanery. Our parish is part of the Bristol East Deanery. The Dean is Fr Gregory Grant VF, Parish Priest of St Patrick's Redfield. As a deanery the parishes try to work together where possible and so we have an annual celebration of the Sacrament of Confirmation for the Deanery. Each Church in the Deanery has Clergy details together with the Mass & Confession times, for each Parish.
﻿﻿﻿﻿

Our fellow Parishes in Communion
From September 2010 St Augustine's, Downend, St John Fisher, Frenchay, Our Lady of Lourdes, Kingswood, St Paul's, Yate, and St Lawrence, Chipping Sodbury are now Parishes together in Communion. If you need details of weekend or weekday Mass times or confession times etc please check with the individual Parish as times may vary:

Our School:   St Augustine of Canterbury Catholic Primary School is situated on the same site: 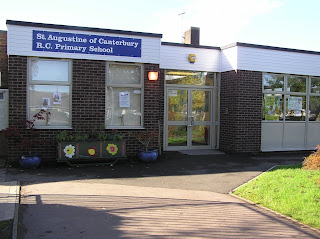