Bishop Declan talks about the Holy Land – Podcast
Bishop Declan spoke with James Abbott from the Bishop’s Conference about the online co-ordination meeting this week. He speaks about the current situation in Gaza how the Christian community is supporting the whole community. They also discuss how we, and the co-ordination group, can support the Christian communities in the Holy Land.
CLICK HERE to go to the link to listen
Thank you Martin for sharing your musical talents with us all.
Reflections from Deacon Vincent for the 3rd Sunday in Ordinary Time (B)
1st Reading from the Prophet Jonah 3: 1-5, 10.
This prophetic book is an enchanting and unusual book in that there is more narrative than is customary, and very little of the prophetic utterances of Jonah. It is a bit of a mysterious book and has many different dates ranging from the 2nd century to 8th century BC. Some view it as a satire on the self-righteousness of religious people. Jewish scholars view the book as teaching fellow-Jews that Gentiles can receive God’s loving forgiveness. Hat is exactly where we begin with Nineveh the capital city of Assyria, a Gentile city. His preaching of the coming destruction to the city was believed in by the Assyrians, as they trusted God’s message and his message even reached the King of Assyria, and he went into penance putting sackcloth and ashes, as a sign. The whole city commenced to repent, and God was moved by their repentance and relented from destroying the city. It is a salutary lesson for all of us that it is never too late to repent and believe the Good News. God really does love us all and seeks our salvation, not our destruction. The thing that strikes me, as well, is that Jonah must have been a very powerful and convincing preacher, it is a shame that we do not have more of his utterances to ponder.
Responsorial Psalm 24: 4-9.
A beautiful song seeking forgiveness and help, following the theme of Jonah’s message to the people of Nineveh. “In your love remember me, because of your goodness, O Lord.” Is a cry we can all make, from time to time during the day, especially at times of temptation.
2nd Reading from the first letter of St. Paul to the Corinthians 7: 29-31.
We have to read this passage with some care, as Paul is addressing the Corinthians who had a reputation, throughout the known world of the time, for sexual misbehaviour, and Paul may see celibacy as a sign of contradiction, but more likely look at his reference to the sense that time was coming to an end and so he most probably did not think that they would have to stay celibate for long. He sees the existing world order as coming to an imminent end and the reign of God to supersede. We would misread the apostle if we considered him an old, grumpy Puritan, decrying sex as evil. Paul was a very popular man amongst the people, with a very practical approach to living the Gospel life. It is always important to study all his writings and the interpreters, before drawing conclusions about the man.
The Holy Gospel according to Mark 1: 14-20.
There is a starkness about the sudden urgency of the mission, the Precursor has been arrested, so now Jesus must be about his mission. The same momentum is maintained in the call to the first disciples. There is no room for hesitation, as soon as the call comes, we must respond. It also illustrates Jesus’ sense of humour in making them “fishers of men.” A thing to note in Mark’s Gospel is that where we see “by the sea of Galilee”, then something momentous is about to happen. They follow immediately, leaving everything behind. The message is so urgent there is no time to look back, only forward into this new era of the “Good News”, the Gospel of Jesus Christ, has now dawned, nothing else matters. Mark considers that this the only way to respond to God’s call, “Repent and believe in the good news.” Mark is hoping those of us who take up this Gospel will respond with the same enthusiasm as his first
God bless you all.
Deacon Vincent. 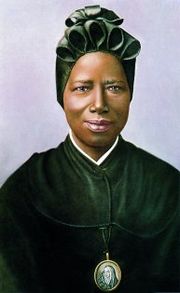 Welcome the Stranger – Celebrating the Feast of St Josephine Bakhita - 8 February 2021, 5-6.30 pm - A Message from the Adult Education Dept of the Diocese

All are invited to join Bishop Mark O’Toole and Bishop Declan Lang for an evening of prayer and reflection on the issues facing refugees, migrants and those affected by modern slavery. Guest speakers include Nick Hanrahan from the Jesuit Refugee Service and Caroline Virgo from the Clewer initiative. The event will take place via zoom and you can register to attend by following this link: https://forms.office.com/Pages/ResponsePage.aspx?id=KidbqQHRkEKiqby9p4Zaca73jzxgOQNHsGHGCFRchfhUME1HUTNENjRJV1EyQVdGU0ZFWEpFNFhQVCQlQCN0PWcu