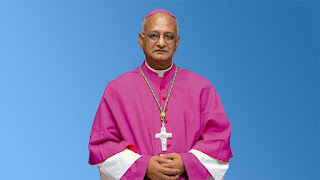 It is with great sadness that we pass on the news of the death of our dear friend 'Bishop Moses' who died on Monday.
Bishop Moses was held with much regard at St Augustine's and our parish has enjoyed many years supporting his works in Bangladesh.
Let us join together to pray for his soul, for his family and friends, and for his Diocese at this difficult time.
Let us also share our stories and photos over the coming days - please let us know your memories of Bishop Moses and any photos you may have  - email them to the parish office.

Fr Frank will say 2 Masses for the repose of his soul on Saturday 25th July and on Sunday 26th July for those who are able to attend.

Vatican News announced his death this morning. Here is their report;
Archbishop Moses Costa of Chittagong died on Monday at the age of 69. Bangladesh's Catholic community is greatly grieved by his death.
The Catholic Church of Bangladesh is mourning the loss of an archbishop who died just weeks after recovering from Covid-19.   Archbishop Moses Costa of Chittagong, in south-east Bangladesh, died on Monday in a hospital in the capital Dhaka, after suffering a series of strokes. He was 69. He became the senior-most clergyman of the Catholic Church of Bangladesh to die during the coronavirus pandemic.
The Holy Cross archbishop was flown by helicopter in critical condition and admitted to the ICU of Square Hospital in Dhaka on June 13.  Suffering from severe respiratory distress he was tested positive with coronavirus the following day. His condition improved significantly and he tested negative for the virus on June 22.  He continued to remain in hospital for further treatment. However, his condition took a drastic turn on July 8 and he was transferred to the ICU again. According to the medical board, he suffered multiple strokes caused by a brain haemorrhage on July 9 and passed away Monday morning. He will be buried in Chittagong on Tuesday evening, Chittagong Archdiocesan officials said.
An irrecoverable loss: The archdiocesan website announced his death saying his passing away has left “all the faithful in a state of tremendous shock”. “Chittagong Archdiocese is now without a shepherd! The whole Christian community of Bangladesh especially the faithful of Chittagong Diocese is under deep sorrow and pain.” “His death is a great loss for the Christian community as well as the whole of Bangladesh. His death is an irrecoverable loss for all of us,” the archdiocesan community said. Manik Willver D’Costa, the pastoral coordinator of Chittagong, commended his archbishop’s “extraordinary efforts in laying a strong socio-economic foundation for the Church and revolutionizing the systematic reorganization of Church apparatus”.  In this, Archbishop Costa encouraged a spiritual awakening and missionary zeal in the clergy, the religious and the laity.
Youth Formation:
The pastoral coordinator pointed out that the archbishop’s simplicity and cordial manners endeared him to others, especially the young people.  According to the late archbishop, Catholic youth formation was not just about teaching, but “a journey and growing up with Jesus Christ”.
The Bangladesh Catholic Student Movement, a Church-affiliated youth group called the late archbishop “a pioneer of the Bangladesh Church and guiding light for youth leadership,” in a statement.
Archbishop Costa’s death has sent shockwaves among Bangladeshi Catholics at home and abroad. Hundreds posted tributes on social media.
Biography: Born on November 17, 1950, the youngest of 10 children, Moses Costa entered the Little Flower Minor Seminary of Bandura in Dhaka district in 1963.  He joined the Holy Cross Congregation in 1971, professed his final vows in 1981 and was ordained a priest on February 5, that year. He served as assistant parish priest in two parishes from 1981 to 1984.  He was sent for higher studies to Rome, where he obtained licentiate degrees in pastoral theology and spirituality at St. Thomas Aquinas University in 1986 and in psychology and counselling at the Pontifical Gregorian University in 1989. Back home, Father Moses taught psychology and pastoral theology at the National Major Seminary in Dhaka and became director of the Holy Cross Seminary and Holy Cross Scholasticate.  He also became rector of the National Major Seminary and a member of the Holy Cross Congregation General Council. On July 20, 1996, Saint Pope John Paul II appointed Father Costa as the 6th bishop of Dinajpur Diocese, where he served until 2011.
Bishop Costa was appointed the 5th bishop of Chittagong in 2011 and became an archbishop when Pope Francis elevated Chittagong to an archdiocese in 2017.


The late archbishop was the secretary-general of the Catholic Bishops’ Conference of Bangladesh (CBCB) and also the chairman of its Commission for Health Care.