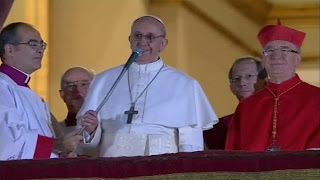 The Catholic Church in England and Wales issued a statement on behalf of Archbishop Nichols welcoming the election of Pope Francis, in which he expressed his "great joy".
"As he begins his new apostolic ministry, as the Bishop of Rome and shepherd of the universal Church, Pope Francis I may be assured of the prayers and loving support of the Catholic community throughout England and Wales," he added.
His predecessor Cardinal Cormac Murphy O'Connor said the Church had been "very blessed".
Speaking to BBC News, he predicted Pope Francis would "bring a new kind of style to the Catholic Church".
"As you see, he's called himself Francis - Francis the man for the poor. And he is a man who is experienced over many years, especially in his own country but also elsewhere, something of that love for poor people."
"His own simplicity of life, I think, will be a great example to people," added the cardinal.

Kevin Flaherty, editor of the Catholic Times, said: "He travels by bus, visits the poor, lives simply and even cooks his own meals.
"In choosing the name Francis - after St Francis of Assisi - 'Fr Jorge', as the people still call him, obviously wants to continue to live simply and humbly.
"As a man of prayer, both qualities will bring a different style of leadership to the papacy, and inject a much-needed spirituality to the Catholic Church in the modern world."
From BBS News Website

Email ThisBlogThis!Share to TwitterShare to FacebookShare to Pinterest
Labels: Pope